Can Makers celebrate 85 years of the beer can

The Can Makers association is celebrating the 85th anniversary of the beer can, launching its limited edition Canniversary Ale in partnership with Felinfoel Brewery, the first in the world to can craft ale.

It follows news that sales of cans are booming, the pandemic accelerating what was already notable growth and driving demand to record highs. 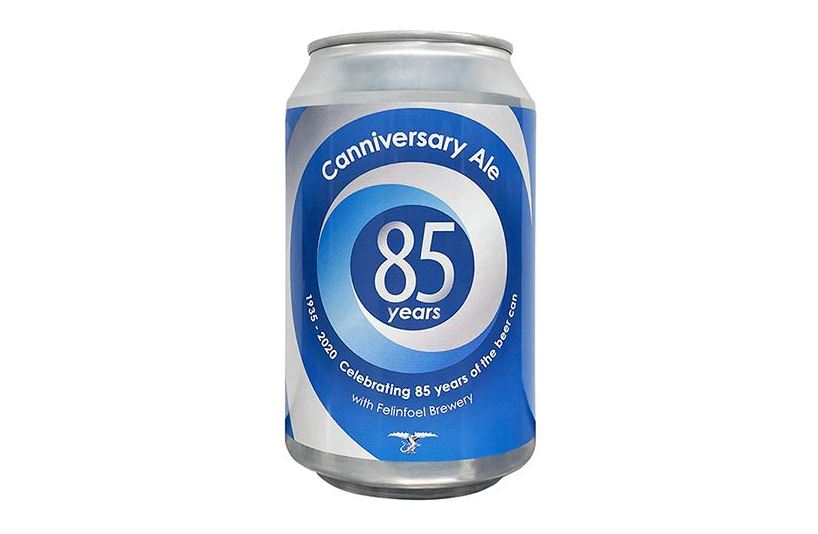 Simon Gresty, chairman of the Can Makers association, said: “After more than 80 years of continuous innovation, the beverage can has played a pivotal role in the dramatic rise of craft beers, thanks largely to the design possibilities it offers as well as its convenience and environmental credentials.”

Purpose built in 1878, Felinfoel Brewery, which beat rival Buckley’s Brewers to the prize, produced its first cans of craft ale in 1935, noting that they had developed the can ‘to hold the perfect beer’, unlike pioneers in the U.S. whose first cans were suitable only for pasteurised beer.

Lesley Griffiths, Welsh Government Minister for Environment, Energy & Rural Affairs said: “This has been an extremely difficult year and I am proud of the way in which communities and industry have responded to extraordinary challenges, keeping as many businesses open as possible, operating not just safely but remarkably successfully.

“It is particularly pleasing to see pioneering Welsh businesses like Felinfoel Brewery celebrate a key milestone in partnership with the Can Makers association. The can manufacturing industry and food and drink sector play a vital role today in the Welsh economy, and because metal beverage cans can be recycled again and again without any loss in quality, they are a sustainable option too as we work together towards a more resource efficient future.”

But it’s not just the brewers of craft beers that love cans. Cocktails in a can were recently added to the basket of goods used by the UK statistics office to calculate inflation and increasing numbers of premium brands are adopting sleek 250ml and 200ml cans to package high quality wines, spirits and mixers.

Gresty added: “Demand for cans has never been greater with billions of cans and ends now shipped in the UK every year. Managing the extra requirements throughout the pandemic, has brought many additional challenges but the industry has proved its resilience.

“Can makers have adapted to meet the extraordinary levels of demand that are being seen not just in the UK but globally. Crucially, the infrastructure is already in place with the capacity to recycle every beverage can produced in the UK and every local authority collects beverage cans. The beverage can is now the most recycled drinks pack in the world.”

Described by the industry as the shift from keg to can, ongoing restrictions affecting the hospitality industry have seen sales of cans for consumption in the home soar, and demand looks set to continue rising.

In our latest Candid Q&A, we spoke to the founder of Nania’s Vineyard, James Bayliss-Smith...

Candid Interview: Every Can Counts (ECC)

In this month’s Candid Q&A, we spoke to Every Can Count’s UK programme manager,...

Read more
We use cookies on our website to give you the most relevant experience by remembering your preferences and repeat visits. By clicking “Accept All”, you consent to the use of ALL the cookies. However, you may visit "Cookie Settings" to provide a controlled consent.
Cookie SettingsAccept All
Manage consent

This website uses cookies to improve your experience while you navigate through the website. Out of these, the cookies that are categorized as necessary are stored on your browser as they are essential for the working of basic functionalities of the website. We also use third-party cookies that help us analyze and understand how you use this website. These cookies will be stored in your browser only with your consent. You also have the option to opt-out of these cookies. But opting out of some of these cookies may affect your browsing experience.
Necessary Always Enabled
Necessary cookies are absolutely essential for the website to function properly. These cookies ensure basic functionalities and security features of the website, anonymously.
Functional
Functional cookies help to perform certain functionalities like sharing the content of the website on social media platforms, collect feedbacks, and other third-party features.
Performance
Performance cookies are used to understand and analyze the key performance indexes of the website which helps in delivering a better user experience for the visitors.
Analytics
Analytical cookies are used to understand how visitors interact with the website. These cookies help provide information on metrics the number of visitors, bounce rate, traffic source, etc.
Advertisement
Advertisement cookies are used to provide visitors with relevant ads and marketing campaigns. These cookies track visitors across websites and collect information to provide customized ads.
Others
Other uncategorized cookies are those that are being analyzed and have not been classified into a category as yet.
SAVE & ACCEPT
Powered by